It was planting time when the Sugar News visited with Ronald R. Hebert Jr. He was supervising planting activities at a field just south of Highway 182 (the old U. S. 90) in Jeanerette. The soldier harvester and hand planters were dodging the August rains but Ronald was in good spirits.

The weather is never just right for farmers. On one hand, Ronald was a bit grumpy because a field he wanted to plant was too wet to get into. On the other hand, he was also happy because the rain came just as Louisiana was bordering on drought conditions.

“The rain is a good thing right now because the cane was a bit short,” he explained.

He’s got a seven-wagon planting rotation going on in the field and his planters are a mix of locals and guest workers. It’s always interesting to watch sugarcane planting because there are so many ways to do it.

For readers unfamiliar with cane planting, sugarcane is a grass and more than one crop can be harvested from a single planting. Farmers like to plant about of a fourth of their acreage with seedcane each year. Sometimes the seedcane is a new variety or a variety the farmer is eager to expand. It’s a laborious process.

Ronald likes the mechanical hand-planted system best as a mechanical planting wagon drops whole cane stalks into a furrow. Employees walk the rows to make sure the cane is dropped evenly. It’s a job generally done during the heat of the day. They can plant about 70 acres daily but the 2018 planting season ened up being very challenging. After experiencing near drought conditions, frequent September rain prolonged planting until mid-October.

Ronald’s progression into farming was natural. His father, Ronald Sr. was a cane farmer as was his grandfather, Dozelia. Ronald began on the farm when he was 16 while he attended St. Joseph Catholic in Jeanerette. Upon graduation, he went full time on the farm but decided two years later to attend the Nicholls State University Sugarcane Technology program. He completed a two-year associate program and would have finished a four-year program but Ronald Sr., born in 1921, began to suffer from failing health.

“My dad never quit farming,” Ronald said. “He continued to boss me around until he passed away at 79.”

The farming heritage left to Ronald Jr. has now grown to a 3,200-acre sugarcane operation. In addition to Ronald R. Hebert Inc., Ronald also has a partnership with Todd Morris in Southside Farms and works with Todd to manage 2,000 acres. Also included in Ronald’s farming operation is his sister, Janice, her husband, Terry Mekash, and nephew, Matt. Todd Morris’ son, Beau, also plays a significant role in farming operations.

Oddly enough Ronald’s family connections reach all the way from Bayou Teche up to Michigan, the fourth largest sugar beet producing state. His brother-in-law, Terry, is from Michigan. Terry met Janice when she worked in the hospital industry. Both Terry and Janice are in second careers on the farm. Terry joined father-in-law Ronald Sr. on the farm in 1987 but is slowing down.

Louisiana’s sugarcane farms are all family owned but that doesn’t mean they don’t have the same issues as any business entity, large or small. Production, price and labor are all big issues Ronald is concerned about and he’s grateful to have his family helping him.

“We have the Hebert name on my father and mother’s side of the family,” he said. “We’re at least five generations of farmers in Louisiana.”

Ronald helps represent Iberia Parish sugarcane farmers as a director on the board of the American Sugar Cane League, the commodity group that advocates for the Louisiana sugarcane industry. He’s served two years on the League board but has allowed his fields to be used for League-coordianted research activities for many years. He’s also served on the boards of the old Jeanerette Sugar Factory and is currently secretary treasurer at St. Mary Sugar Mill and president of Teche Farm Supply.

Ronald and his wife, Corinne, raised four children who followed different life paths. One is a medical doctor, another is a nurse. One is a CPA and the youngest is still in college. Their careers seem set but Ronald knows there’s a lot of room on the farm. 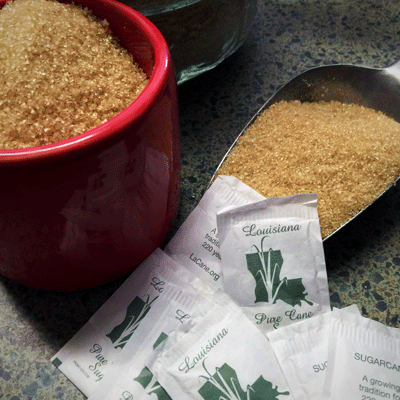 Granulated sugar! Liquid sugar! Brown sugar! Confectioner’s sugar! Fruit sugar! Even sanding sugar! There are many types of sugar, some with very specific purposes. Here’s a tip: the size of the crystal and the amount of molasses surrounding the crystal determines the use. But one thing is for sure: Cane sugar is nature’s sweetener.

Cane in the classroom

Teachers, LaCane.org has many educational resources available that work great in the classroom. We have “Raising Cane In Louisiana,” an all ages video and “From the Cane Field To Your Sugar Bowl Starring Farmer Joe and Marie” for younger schoolchildren. But there’s more! We’ve also got “From Louisiana’s Sugar Belt to Your Table,” a fully downloaded educational packet complete available for you use.

The Louisiana Sugarcane logo looks great on a button-down

You don’t have to climb very far on a Louisiana family tree to find someone connected to the sugarcane industry. Show them some love by showing your colors. Get the popular Louisiana Sugarcane logo on your hat, your shirt, even a set of glasses.
GET THE GEAR