Sugar, which had become a staple of high-society diet, was in short supply. When French scientists gave Napoleon sugar made from beets, he directed farmers to plant a massive crop and provided government money to help build processing factories.

The large-scale production invented in France soon flooded Europe with beet sugar, making it finally affordable for everyone.

After Waterloo, trade routes reopened, and beet sugar declined as cane sugar returned to Europe. But the new crop, and the technology used to efficiently turn it into sugar, was out and would create a global commercial enterprise.

Fast-forward to 2018. Farmers in Minnesota and North Dakota – many in the Red River Valley along the border – have become the world’s most efficient sugarbeet producers. And they just planted what they hope will be the best crop ever.

Planted around this time every Spring, sugarbeets have fueled generations of family farms and built the small towns that dot the Valley’s 550-mile path. ForDan Rosenfeldt,sugarbeets offered a path to becoming an independent farmer instead of a farm laborer. 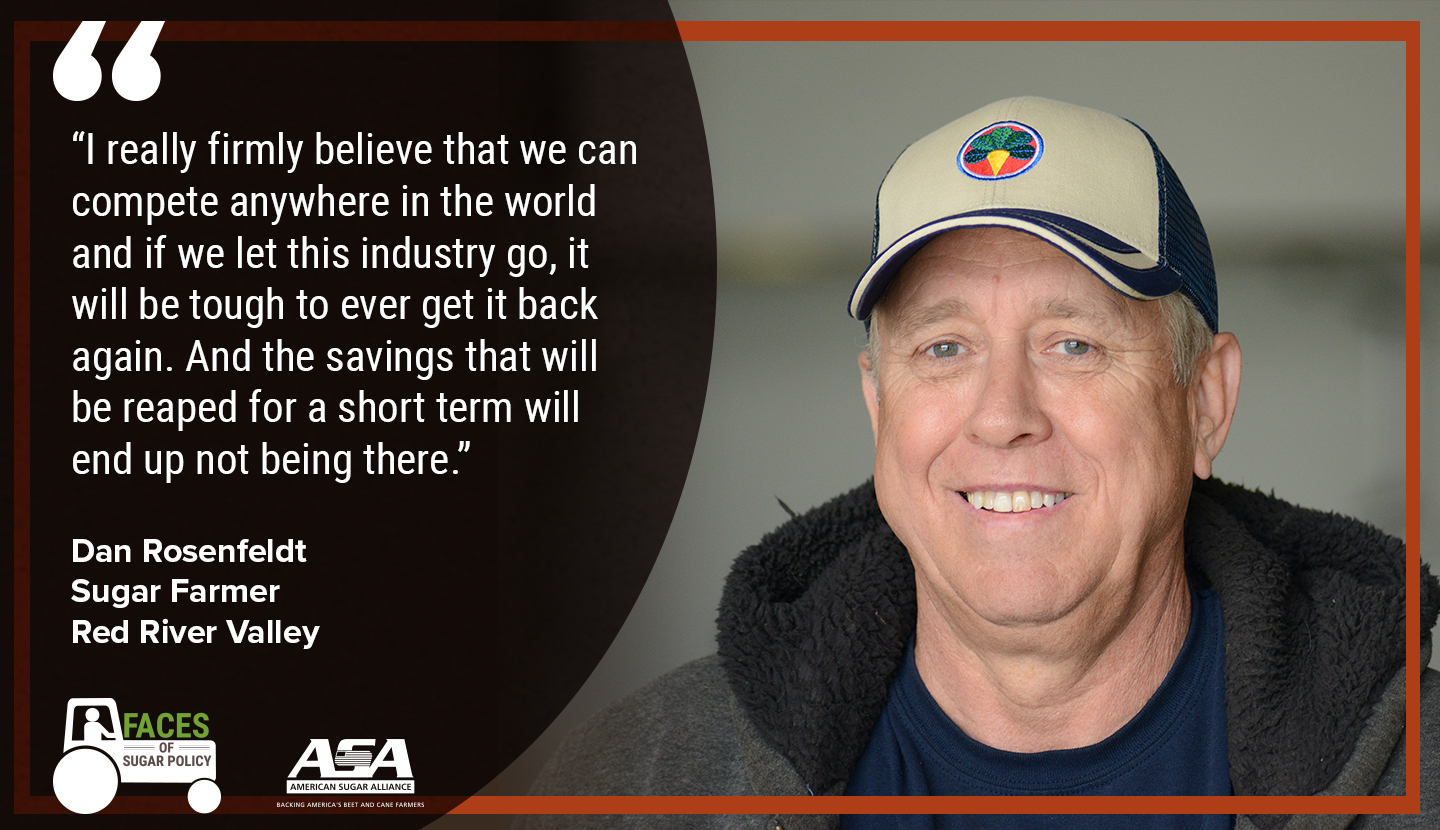 "That was the thing that allowed me to start and really become a farmer on my own,” he said. "It was the stability and the opportunity that sugarbeets gave a person. With very limited acres, limited resources, you could get into the game.”

Rosenfeldt’s story is unusual in the Red River Valley. He didn’t grow up on a farm. His father was a farm laborer, a job he would hold as a young man. He went to college to be a teacher but fell into farming because teaching jobs weren’t available in his home of Moorehead, Minnesota.

He has four children, all of whom have advanced degrees and are not working on the farm, and eight grandchildren. His wife is a teacher and her income helped him grow the farm. He farms with his nephew and brother.

One part of Rosenfeldt’s story is common across the region. He is worried about the future if Congress weakens sugar policy during the current Farm Bill debate.

"This is my life, and I really firmly believe that we can compete anywhere in the world,” he says. "But if we let this industry go, it will be tough to ever get it back again.”

About an hour from Rosenfeldt’s place, farmerRod Olsonkneels in a field of recently-planted sugarbeet seedlings. He admits he spends more time that he should checking on the plants as they grow. 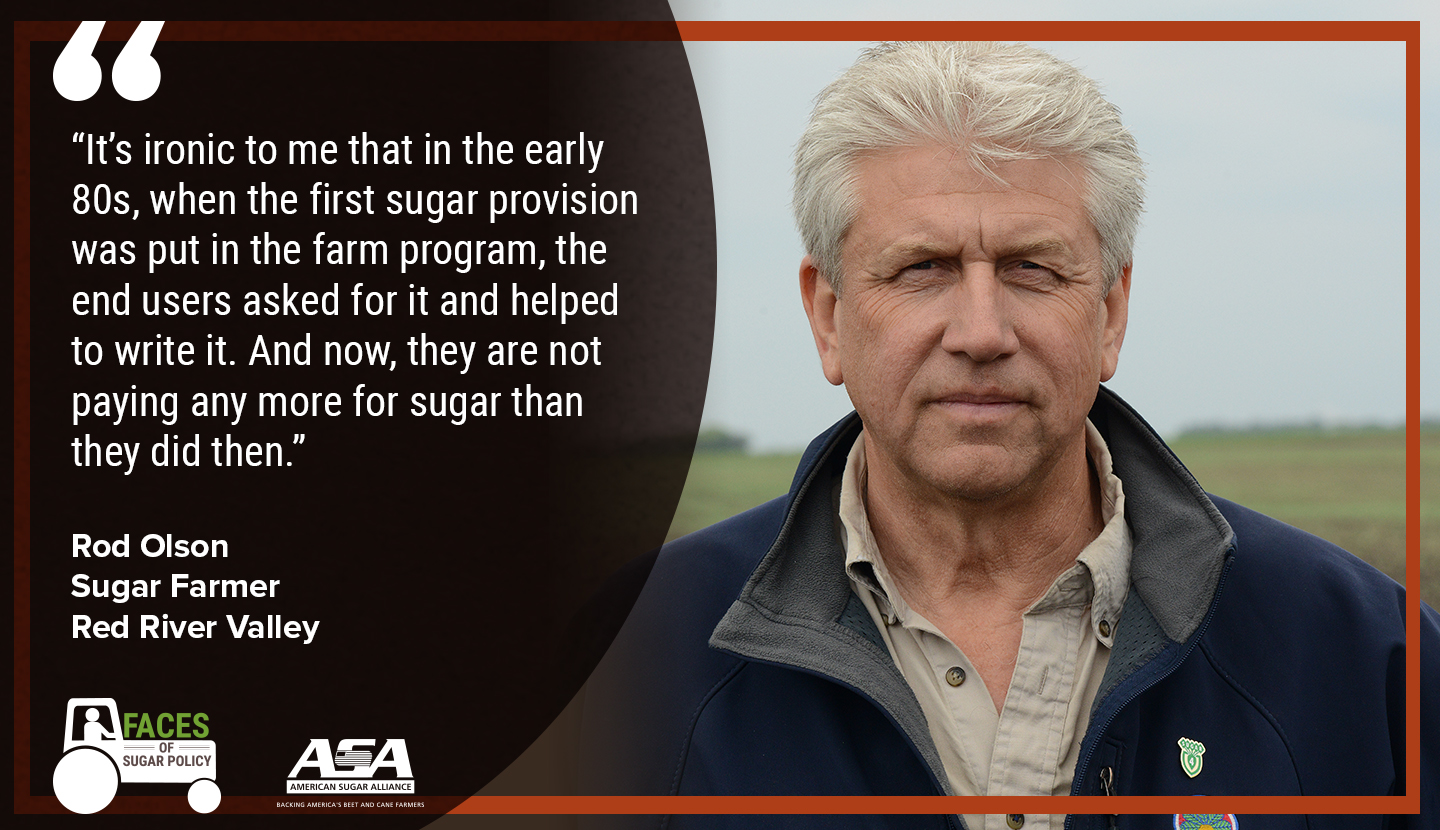 Olson’s story is that of the quintessential American farm boy. He decided against college in the 1980s because the farm crisis threatened to destroy his family farm. He became free labor for his parents for years as the family worked to keep the operation going.

Olson wishes he had gone to college but says he always knew he would farm.

"Well you know I started on a tractor when I was about 8 years old and been in one ever since,” he says. "I knew at an early age this was the occupation I wanted to do.”

It’s been a good occupation for his family and the community of Hallstad. The year he graduated, the high school’s football team went to the state championships. But the community, like many others across the Red River Valley, is in decline. The high school will close after this year and merge with one in a neighboring town.

"There’s just not enough,” he says. "Enrollment is down so far.”

He says Hallstad would struggle to survive without sugarbeets. The community in Caledonia, North Dakota, where he also farms sugarbeets, would face a similar fate.

The talk of removing the no-cost sugar policy from the Farm Bill baffles him as he looks back on his start in farming in the tumultuous times of the 1980s.

"It’s ironic to me that in the early 80s, when the first sugar provision was put in the farm program, the end users asked for it and helped to write it,” he says.

Those same food companies are now bankrolling efforts to gut the program in favor of subsidized imports.

Brian Ryberg’ssmall community of Buffalo Lake faces challenges similar to those in Olson’s town. Population is declining. Farm kids grow up and move away to the city for school. 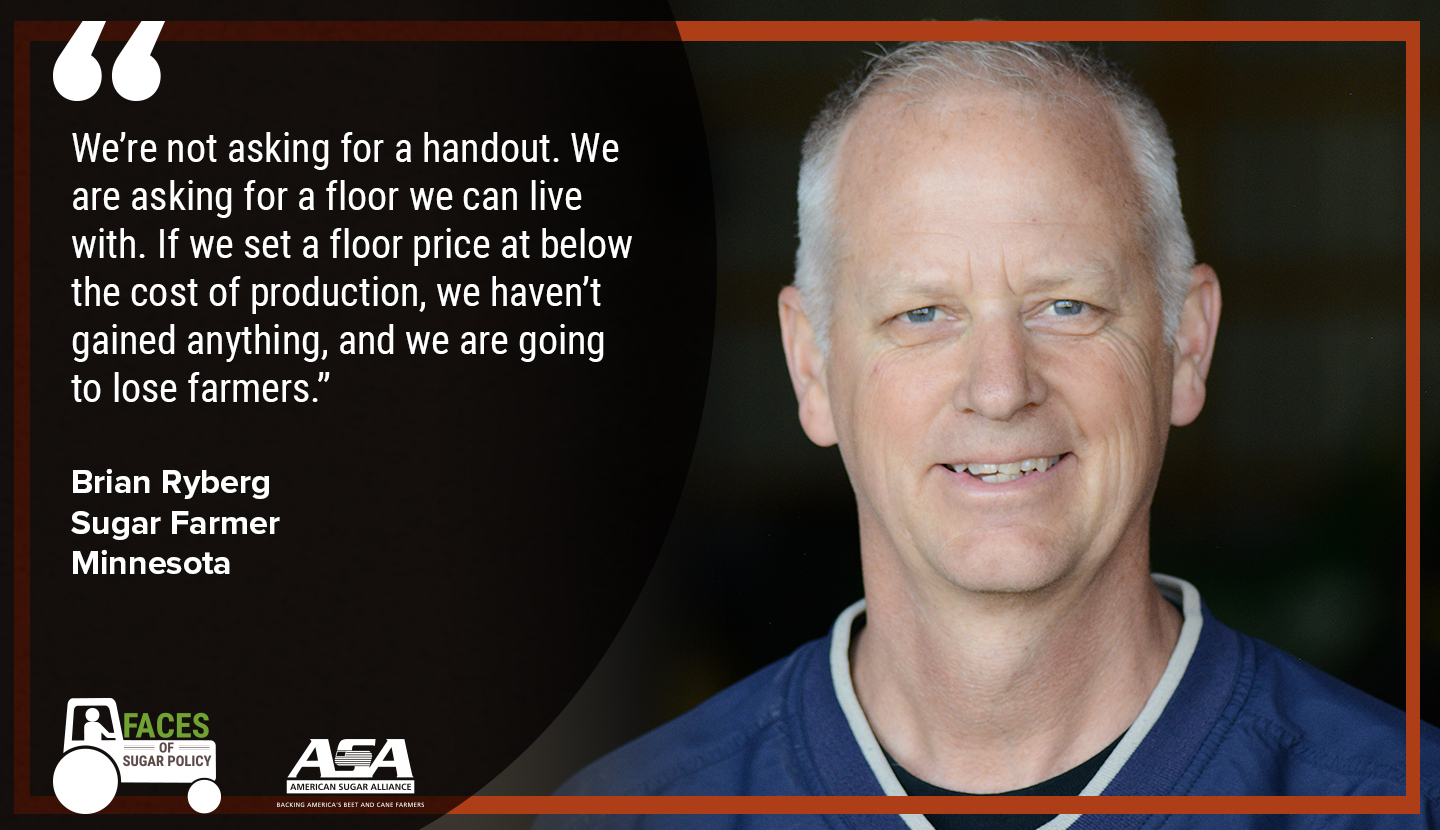 Ryberg’s son is going to pharmacy school and probably won’t be interested in farming. Ryberg is hoping one of his daughters might be. Keeping farms alive is critical to rural America, he says.

Tim Dealthinks a lot about the broader economic implications of changing America’s no-cost sugar policy. He farms near the Minn-Dak factory in Wahpeton, North Dakota. 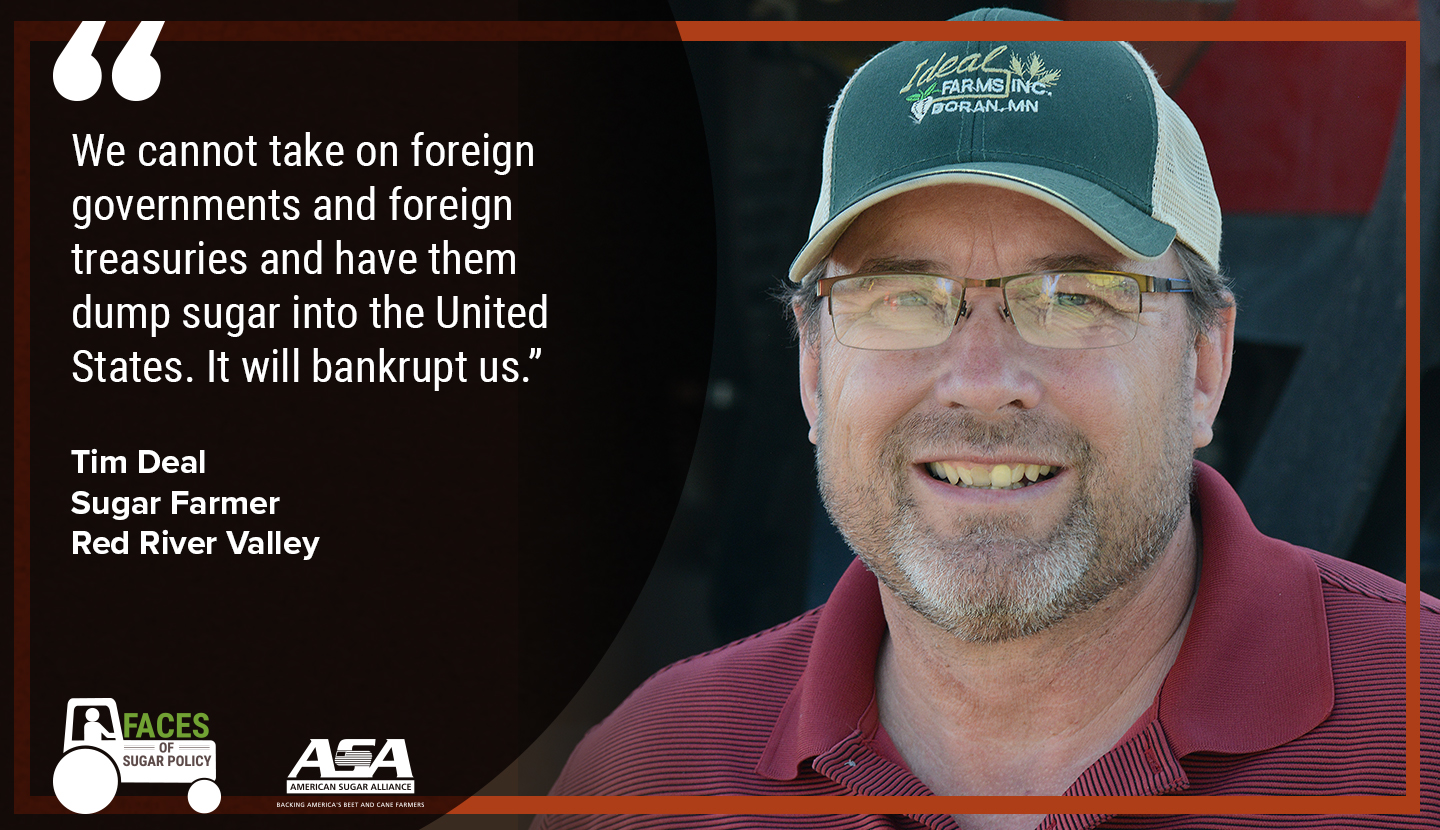 "We can continue to grow beets but we can’t compete with Brazil and Thailand and India and all these countries that are subsidizing to no end their sugar industries and creating this dump market,” he says. "And if our customers, the people we sell sugar to, really think they are going to have the infrastructure, the availability of sugar if the sugar industry would go bankrupt in this country, they are going to find out they will be paying a lot more for sugar.”

That’s something he hopes doesn’t happen. He’d like to see his grandchildren farm the land he now farms with his son and grew up farming with his father. 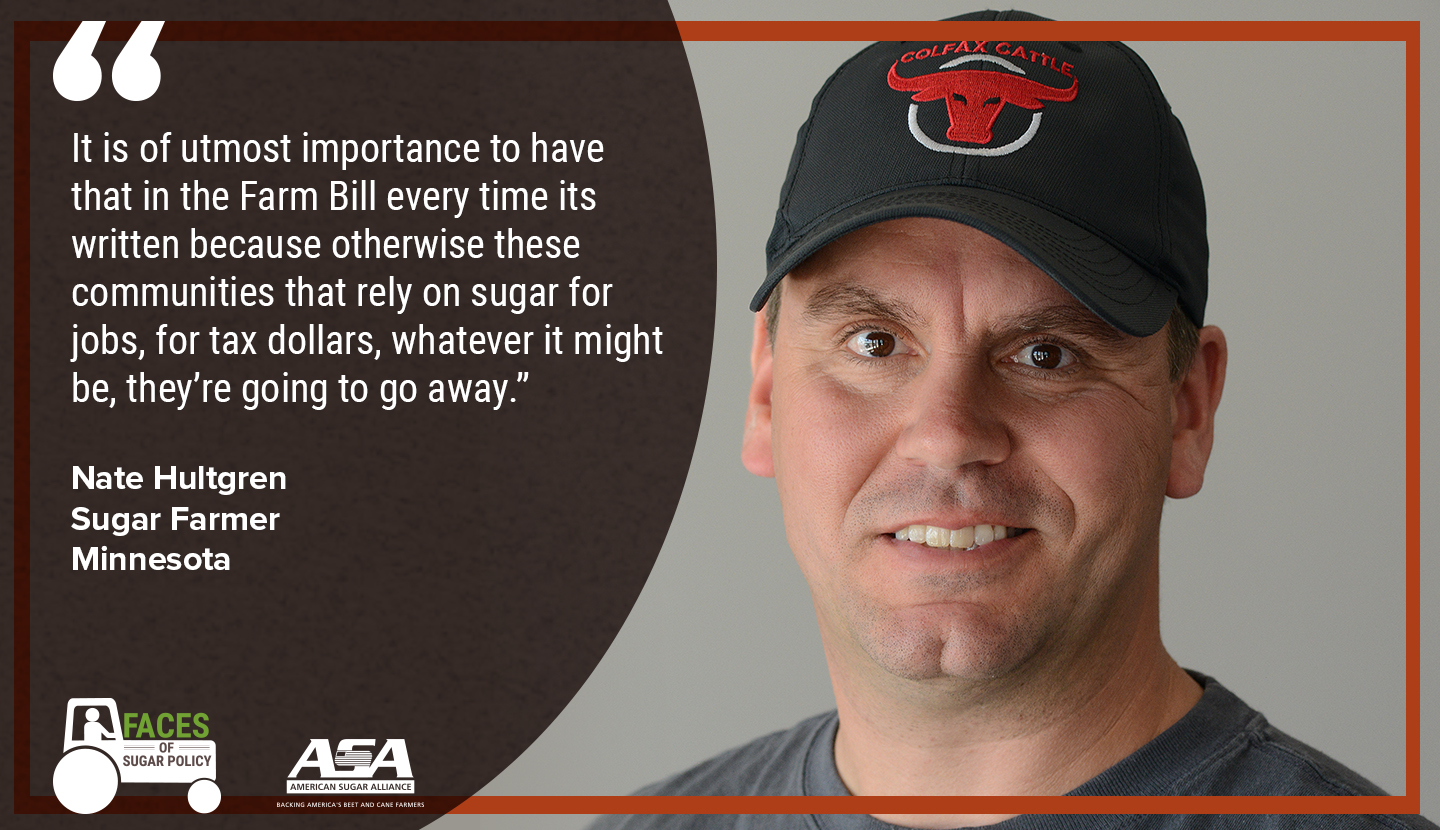 His family has farmed the same land for four generations. He lives on the family farm with his family, his brother’s family, and his mom and dad. There’s a child’s drawing of a seed tender that covers the notebook he keeps in his tractor.

Sugarbeets are a way of life, here. The harvest time dominates family schedules with an all-hands-on-deck attituded across the community.

"It’s one of those things that has to be in your blood to do it,” he says. "Because to lay under a beet digger at 2 in the morning and scrape mud … not a lot of people would want to do it unless you were born with it.”

He shares many of the same concerns his fellow farmers have in the Red River Valley. Congress, he says, needs to remember the Farm Bill is about more than farmers.

"I know it says farm on it, but it really should say rural community bill because that’s what it does,” he says. "It is of utmost importance to have sugar in the Farm Bill…because otherwise these communities that rely on sugar for jobs, for tax dollars, whatever it might be, they’re going to go away.”